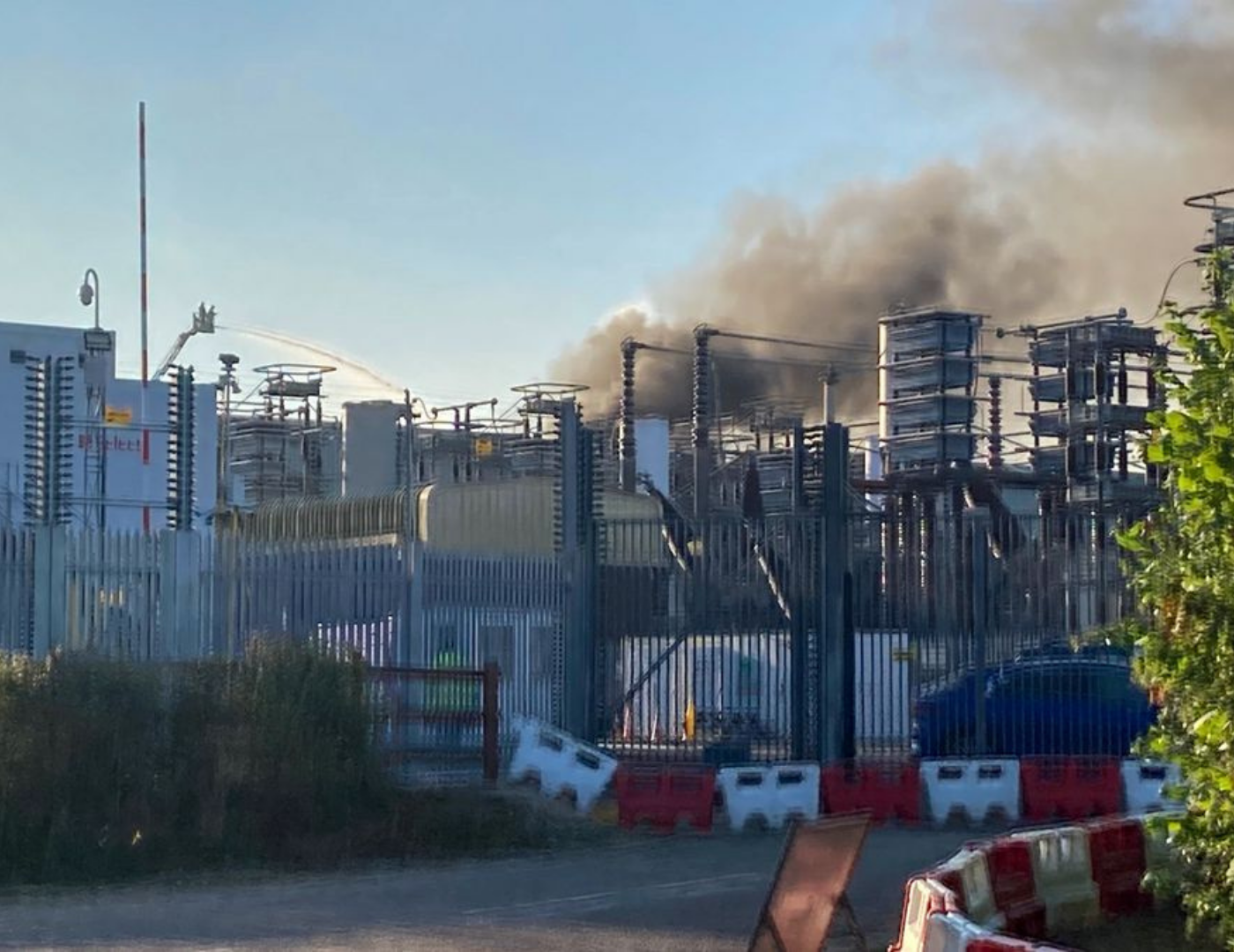 On Wednesday 15th September 2021, a major fire was reported at a National Grid site near Ashford, Kent. National Grid was forced to evacuate all staff immediately and inform local residents of the incident.

The site near Ashford is one of the key electricity convertor stations that links the French and British power grids. As a result of the fire, National Grid stated that more than half of the site's capacity would remain offline until early 2022, causing significant issues for the nation for months to come.

Twelve fire engines attended the scene at its height, while a further four crews remained at the site until the next day. National Grid released a statement on Thursday 16th September which said:

"We can confirm that the fire has been put out and Kent Fire and Rescue service has left the IFA convertor station site at 9:05 this morning. We are on-site assessing the damage and investigating the cause of the fire."

On the same day, a representative at National Grid contacted ICE Cleaning to ask for their assistance. There was an enormous sense of urgency to get the work completed in a timely manner as until the site's control rooms were once again accessible, a national energy crisis was at stake.

The team at ICE Cleaning responded straight away with confirmation that the required fire damage restoration work could begin the next day. ICE Cleaning decided the best course of action would be to divide the team into groups to enable back-to-back, continuous shifts.

ICE Cleaning's technicians attended the site for three consecutive days, with three different teams - each consisting of fifteen technicians - working around the clock to secure a safe environment as quickly as possible. In order to create a safe space, several stages of work were required.

ICE Cleaning's technicians began by taking swab samples to determine the extent of the fire, smoke and soot damage. The teams then used specialist equipment to safely remove traces of soot and ash from the site. All air ducts were also cleaned during this step.

Due to the hazardous nature of smoke, soot and ash, whereby they pose huge health threats such as respiratory and skin conditions, ICE Cleaning's technicians adhered to strict personal protective equipment (PPE) instructions at all times. All hazardous waste was carefully handled and disposed of in line with industry health and safety standards.

After carrying out the necessary fire damage restoration work, the technicians treated the site with an odour neutralising agent to remove the smell of smoke. If left untreated, the smoke particles could have left a lingering smell for several months.

The final step was to take post-clean swab samples to ensure the site had been thoroughly decontaminated and posed no further risks to human health. The team at ICE Cleaning then received sign-off from one of the supervisors at National Grid that they were satisfied with the standard of work completed before departing from the site.

Thanks to ICE Cleaning's adaptability, responsiveness and professionalism, the team at National Grid was able to move quickly in the midst of a national energy crisis to get the power site back up and running in a smooth, orderly manner.

Even more importantly, the work that ICE Cleaning carried out played a crucial role in keeping all members of staff and local residents safe throughout the event and gave National Grid the peace of mind that all had been done to protect its workers and the community.

"It is with great pleasure that I can announce that the National Grid Sellindge Converter Station was loaded to 500MW at 23:00 on Thursday 21st October 2021. This significant milestone has been achieved through the hard work of many companies coming together to support key national infrastructure in a time of need. Without the help of all of your companies coming to our aid we would not have been able to achieve this milestone.

"We would like to extend our sincere thanks to you and your company for all your hard work, long hours and dedication to task in difficult circumstances. Please cascade this letter of thanks to your teams and let them know just how proud we are of their efforts. In only five weeks we, together, have shown grit and determination, come together and raised power again on the station. It has been a difficult time coordinating so much work on site to get the station operational again; however, commendably, it has been done without incident, at pace and in advance of our planned return to service date.

"We have all been faced with the current pandemic limitations, fuel shortages, driver shortages, inclement weather and the pressure of a return to service; our job has not been easy, but it has been completed with exactly the right attitude – collaboration and team spirit.

"Please accept our thanks to all those involved, in the knowledge that you have made a big difference."