What Are The Signs Of A Hoarder? 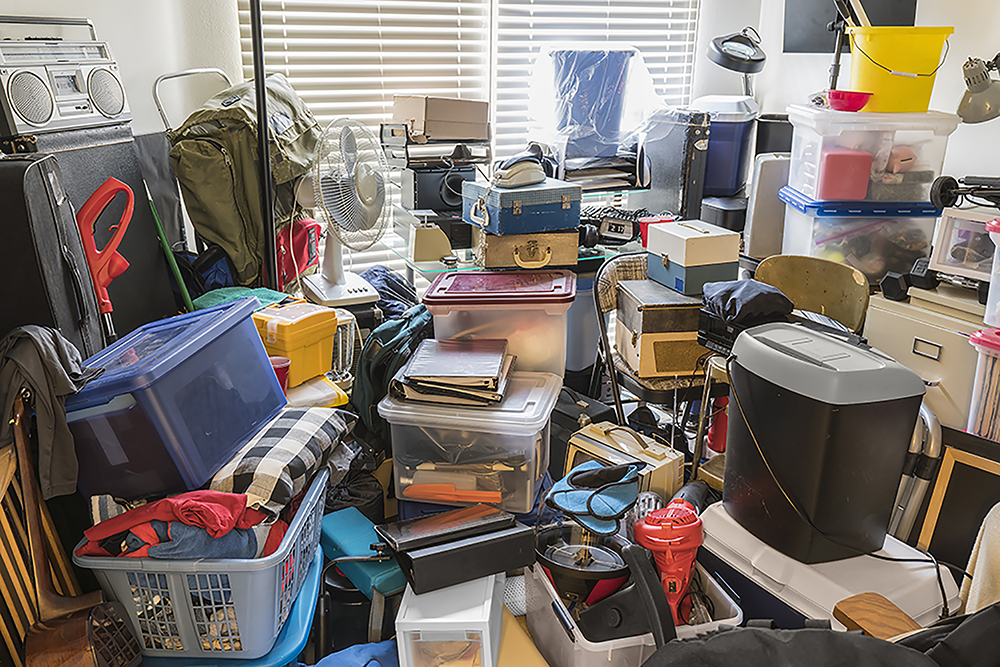 According to the NHS, a hoarding disorder refers to when a person acquires an excessive number of items and stores them in a chaotic manner. More often than not, the items hold little or no monetary value.

Though it may not seem like a serious problem at first, the situation can easily become unmanageable for the homeowner. Hoarding has been known to disrupt the lives of between 1-2% of the British population (Royal College of Psychiatrists).

The American Psychiatric Association states that many find it difficult to separate collecting from hoarding. The main difference is that collectors keep or display items in an organised manner, whereas hoarders do not.

In a study by Dr David Mataix-Cols, a lecturer at the Karolinska Institute in Sweden, it was revealed that approximately 30% of British adults define themselves as collectors. Yet, it can be assumed that many of these choose to purposely avoid the problematic term.

Thanks to recent media coverage, including shows like the BBC’s ‘Britain’s Biggest Hoarders’ and ‘My Hoarder Mum and Me’, the topic of hoarding has risen in popularity over the last decade. Hoarding is more acceptable to talk about than ever before, meaning those suffering with the condition stand a greater chance of receiving the help they deserve.

What are the symptoms of hoarding?

In order to fix the issue, it’s important to recognise the symptoms. Denial is a major roadblock when it comes to curing the hoarder mentality – and it’s not very hard to see why.

Those who hoard mostly do so in private. Despite recent acceptance, many are still too embarrassed to admit to being a hoarder. But why?

The stigma around hoarding presumably stems from the fact that the World Health Organisation (WHO) only recognised hoarding as a mental disorder in 2018. Until then, the matter was far less spoken about.

More often than not, it’s friends and family members that raise the issue. As hoarding is a mental battle, it’s likely that loved ones will pick up on behavioural changes.

Hoarders find it incredibly difficult to part with their possessions – so much so, that they feel stressed at the mere thought of it. Hoarders avoid throwing away items out of fear that they will one day require them – regardless of the value of the items.

Hoarding can quickly get out of hand. One of the biggest signs that you’re a hoarder is being unable to use certain rooms in your own home due to so much clutter. The longer it goes on for, the harder it is to reverse.

Why do people hoard?

According to Mind, people hoard for a number of reasons. One of the most common motives for hoarding is the desire for perfectionism. Perfectionism ties hand-in-hand with the inability to make decisions.

Those who struggle with decision making fear that if they pick the wrong choice, there will be significant consequences. Hoarders may worry that if they throw away an item now, they could need it again in the future.

Hoarding can also be associated with trauma or loss. People with unusual or traumatic childhood experiences are more prone to hoarding, as they’re likely to have memories of losing or not owning many possessions.

Following the passing of close relatives, many of us struggle to discard of their belongings. Therefore, loss often serves as a trigger for hoarding.

In addition to having to deal with their belongings, the distress of losing a loved one can cause people to lock away their emotions. Those finding it difficult to confront the situation may use hoarding as a coping mechanism, creating a distraction from extreme feelings of sadness.

Some experts believe that hoarding is genetic. The Recovery Village reveals that over 50% of hoarders have a first-degree relative with similar hoarding problems.

Whilst it has not yet been determined whether hoarding itself is hereditary, it’s common knowledge that hoarding is linked with other mental health disorders – which are genetic.

Around 75% of people who hoard have a co-occurring mental health condition. For example, obsessive-compulsive disorder (OCD), attention deficit-hyperactivity disorder (ADHD), depression and anxiety.

Though genetics may depict who is more likely to hoard, it can be assumed that shared environments play a bigger role than genes. The reason for this is simple: if you’re around people that hoard, you’re more likely to do it too.

Are men or women more likely to hoard?

Hoarding can be seen in both men and women. It is believed to be a universal phenomenon – meaning it affects individuals of all backgrounds.

However, research suggests that hoarding is more common in men than women (Psychiatry). According to Medscape, around 4% of the male population hoard, as against 2% of women.

Generally, men begin to show symptoms of hoarding at a younger age than women. Hoarding can develop over years or even decades. However, the majority of women that hoard do so following a traumatic event.

One importance difference between men and women is their tendencies to seek help. Promises states that women are more likely to seek and accept help for their behaviour.

Whilst it’s good that women feel comfortable requesting help, it is a concern that men do not – particularly given that men are almost twice as likely to hoard as women.

Does age play a role?

Hoarding is most common among middle-aged adults. Those who experience signs of hoarding in their teenage years may find their symptoms get worse over the years, especially with the influence of stressful life events.

How to help a hoarder

If you think a friend or family member may be hoarding, you should confront them in a soft manner. Due to the sensitive tone of the matter, it’s important to think carefully about how you approach the topic. Else, you may scare the person away wanting to get help.

You should encourage your loved ones to talk with a doctor or mental health professional as soon as possible (Mayo Clinic). Many communities have support groups for those suffering with the condition to get together to discuss the struggle, and to help them overcome the issue.

Hoarding is a complex condition. Whilst there are a range of treatments available, there is no immediate fix. You may be asked to:

According to Promises, CBT focuses on identifying the specific thought patterns and behaviours that lead to hoarding. Once identified, the therapist will be able to assist you in changing your ways.

Tablets, such as selective serotonin reuptake inhibitors (SSRIs), may be prescribed as part of the treatment. However, most doctors will not prescribe drugs on their own – only in conjunction with therapy.

As a result of the connection between hoarding and other mental disorders, you may be asked to undergo additional treatment. It’s vital to address other mental health issues to avoid the

The final step, of course, is dealing with the clutter itself. You will be asked to either clear out your home yourself or give permission for a professional cleaning company to do so.

It’s advisable to opt for the latter option. Not only will a professional team of experts have access to specialist cleaning equipment, but they’ll also hold experience in the industry. They’ll be able to create a bespoke plan of action catered to your personal situation.

Another reason for hiring a professional company is to eliminate the risk of backing out. Many hoarders struggle with going through with the cleaning process, particularly if left to attempt the challenge alone. Though encouragement from friends and family members may help, professional assistance is the most reliable solution.

Here at ICE Cleaning, we offer a professional hoarder cleaning service. We’re nationwide, meaning we cover the whole of the UK, and can be on site within just 60 minutes of your call.

We understand the sensitive nature of the issue, so rest assured our teams will handle the situation in a professional yet discrete manner. We aim to make the process as fast and smooth as possible.

To find out more, speak to a member of our friendly support team on 0208 066 0360 or email us on enquiries@icecleaning.co.uk and we’ll get back to you within 24 hours.