Can Mould Affect Your Dog’s Health? 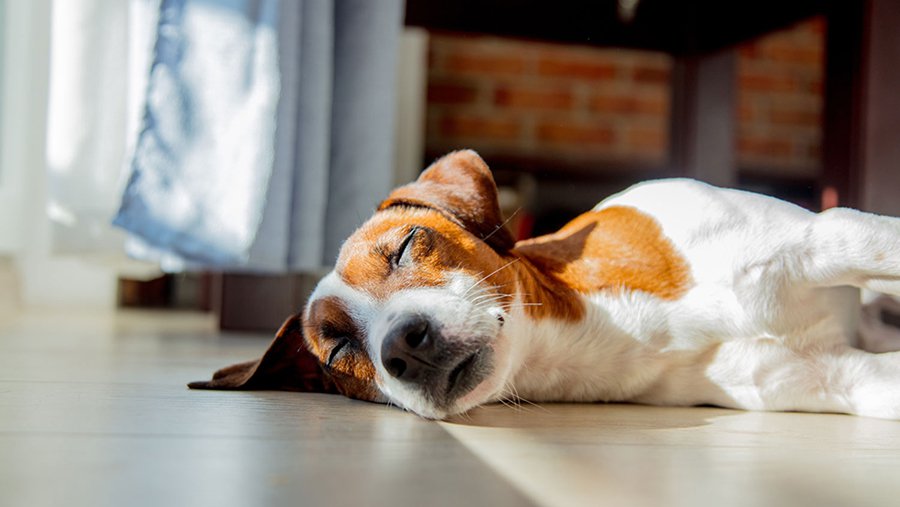 You may be aware of the dangers of mould upon human health, but did you know that mould can affect your pets too?

According to K9 Cover, it is estimated that over 10 million dogs live in British households. Equating to 26% of the adult population, this makes dogs the most popular pet in the UK.

Mould can affect dogs in a number of ways. Though only a handful of mould species are actually toxic, there is a high chance that black mould – one of the most dangerous types of mould – is the culprit in your home.

The term ‘black mould’ does not refer to all moulds that are black. Instead, it is a name used to describe a strand of fungi known as Stachybotrys chartarum (S. chartarum).

Medical New Today states that black mould is known for its toxicity. Black mould releases harmful substances called mycotoxins, which can cause severe health problems if inhaled by dogs or humans.

To find out more about concerns for humans, check out our blog: The Effects Of Mould On Human Health. 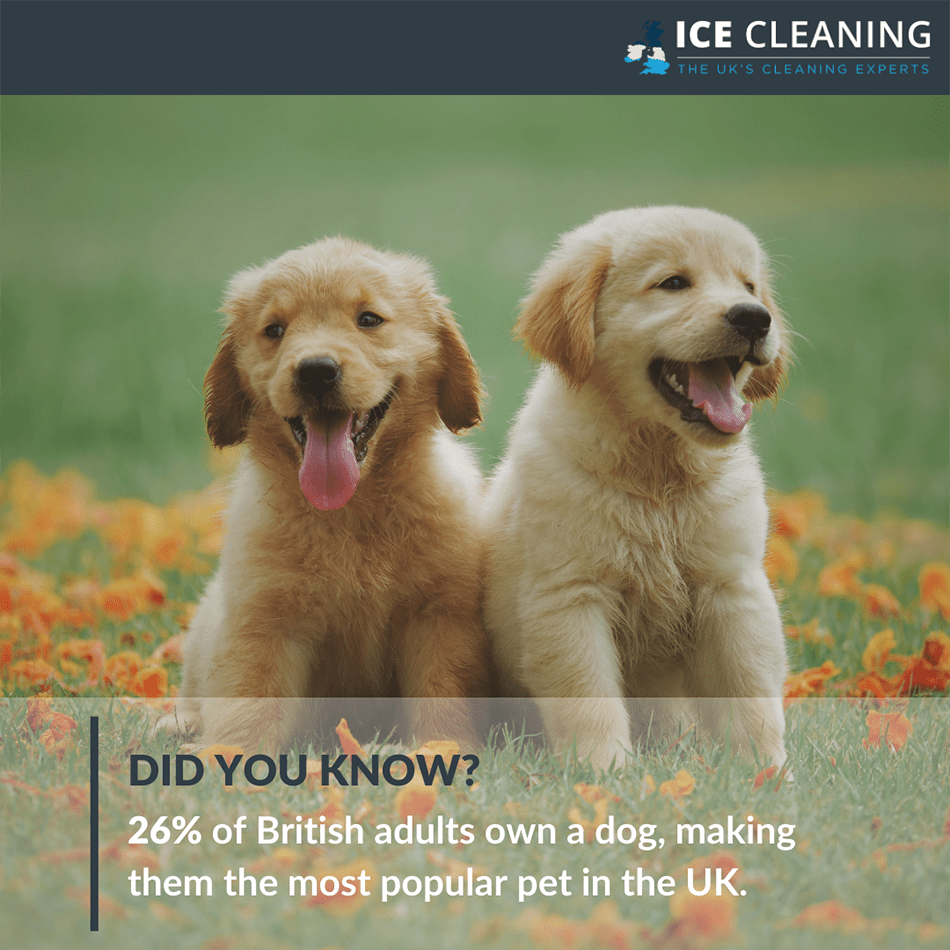 How to spot mould in your home

Spotting mould in your home is not as easy as you may think.

Recent figures from the Office for National Statistics suggest that around 3% of households in England have some degree of damp in their home. This includes:

This is caused by the build-up of moisture in the structure of your building which rises up through tiny holes in the floors and walls.

If you experience a sudden increase in rainwater, such as a heavy storm, the moisture’s usual escape route may become overloaded or stop working. This may lead to penetrating damp.

Condensation is caused by poor ventilation in your property. It is the most common form of damp in the UK.

If mould is visible, it will appear as dark, discoloured patches on your walls or ceilings. The larger the patch of mould, the more dangerous it is to your health. You may also notice heavy moisture in the form of water droplets on cold surfaces, such as window frames.

However, mould is not always visible.

This can make spotting mould increasingly difficult. Only a professional mould remediation firm with specialist tools will be able to detect traces of invisible mould in your home, but you may be able to smell a musty odour lingering in the affected rooms. 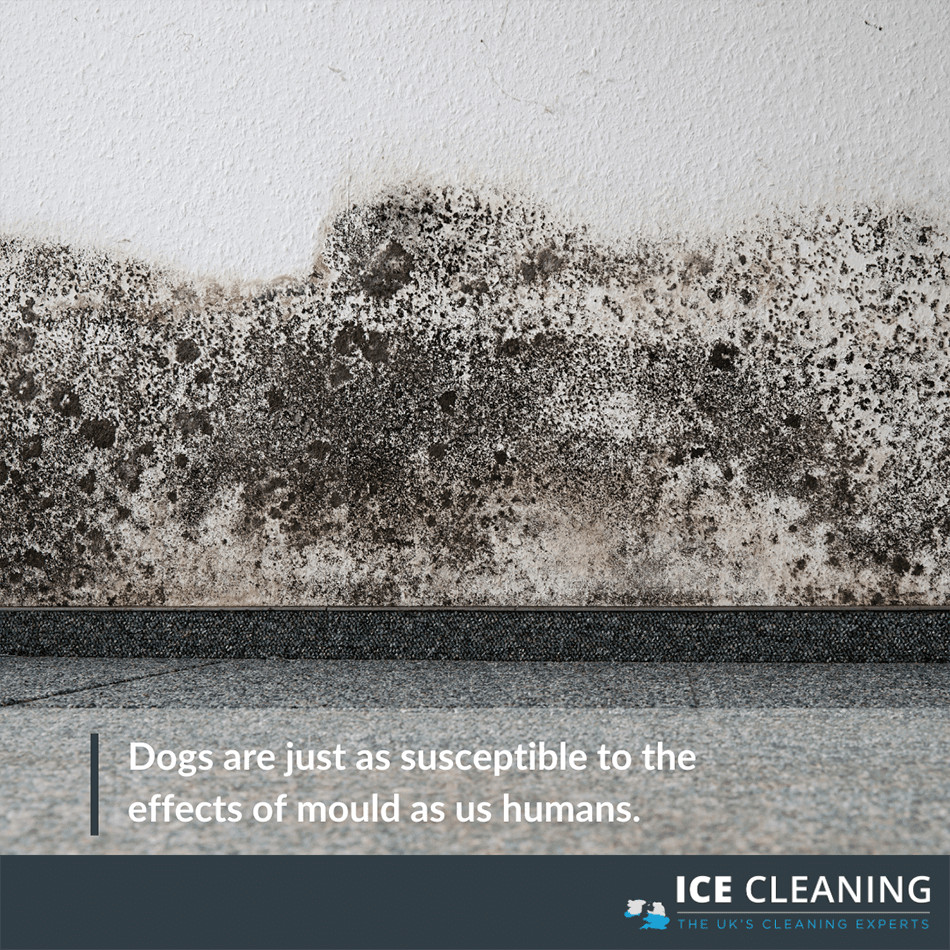 Like humans, some dogs are more sensitive to mould than others. While the immediate impact of mould is often treatable, long-term exposure can be more complicated to manage.

The dangers of mould exposure for pets first came to light in 2007, following an incident where a veterinarian found pulmonary haemorrhages in two cats during operational procedures. Both animals died as a result of health complications (Dogs Naturally Magazine).

It was later discovered that the home had suffered heavy flooding, causing mould to spread. A report by the National Library of Medicine identified high exposure to black mould as the leading contributor to their death.

Aside from pulmonary haemorrhages, mould has been known to cause a range of respiratory conditions. From wheezing to shortness of breath, the inhalation of toxic mould spores can be detrimental to your dog’s health.

Neurological problems may also occur. Your dog may begin to have seizures or tremors, or show signs of fatigue. Some dog’s experience loss of appetite too, so watch out for signs of weight loss.

It may be hard to distinguish between general allergies and symptoms of mould exposure. Both could cause your dog to have a runny nose, however, a seasonal allergy is unlikely to cause bleeding from the nose.

Similarly, excessive exposure to mould may result in skin irritation. As humans, we’re able to manage itchy skin with light scratching. A dog’s way of coping is to lick the affected areas. Over time, this may cause hair loss.

If your dog does manage to scratch the itch, chances are it’ll lead to sores or scabbing. If you happen to notice open sores on your pet’s skin, make sure to cover the affected areas to avoid infection.

How to keep your pet safe

If you think you may have mould in your home, it’s important to act quickly.

The first step is to call the experts. Begin by asking them to carry out a full moisture survey, then let them advise you on the most effective treatment for your situation.

Going forward, seek dog shampoos that fight allergies. Rinse your dog’s body with warm water and a sensitive shampoo, and be particularly gentle near wounds.

You should also wash your dog’s accessories, such as soft toys or beds. Ensure any new toys you buy can withstand the washing machine, else you’ll be forced to purchase a new toy each week. Regular cleaning is essential to kill harmful pathogens, including bacteria and mould spores.

Though it may seem costly decision, a professional remediation company is your best option.

An experienced mould technician will be able to remove all traces of mould in  your home – both visible and invisible – restoring your property to its original, safe condition for you and your pets.

Here at ICE Cleaning, we’re leading the way for domestic cleaning services in the UK.

To book your damp and moisture survey, or find out more about our mould remediation services, give us a call on 0208 066 0360 or email us on enquiries@icecleaning.co.uk.

With teams positioned in a variety of locations across the country, we can be on site in just 60 minutes of your call. Our experienced technicians are fully equipped to handle any situation, regardless of the severity of mould in the property.

Upon completion, we’ll issue you a 12-month guarantee to give you the peace of mind that your home is safe for your family and your dog.